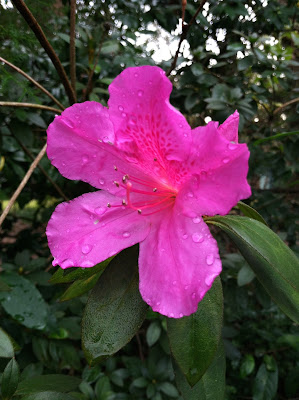 
Good morning, friends! This year I decided to take a challenge every month of the year. January's was to stay as hydrated as possible. I had read that it can improve your skin, give you more energy, help you lose weight etc. etc. so, I gave it a try!

It is recommended for women to drink around 2.2 liters of water/fluids per day. That equals nearly 75 ounces. All in all, I drank an average of 95 ounces a day which is over that recommended amount; however I was still thirsty so I kept on drinking. A few days I only had 50-60 ounces and I woke up with bad headaches the next morning.

It took discipline to keep up with how many ounces of water I drank a day. Though, after a few days it became a game to keep track and ended up helping me with my memory a bit. By doing that, I automatically drank more water and less caffeine and alcohol. In fact, I think I only had one or two cups of caffeine the entire month and haven't had any since (with no headaches or withdrawals from it).

I also found that no matter how much water I drank, if I had a glass of wine I felt like crap the next day. I can be an idiot sometimes, therefore it took me a few tries before I figured it out. My body has completely gotten used to and prefers water. That's quite a capital benefit! I also stopped craving my evening glass of wine as I did before. I saved about $40 on that alone!

My skin does look better, so my mom says. But I didn't see the changes as much as I had hoped. I think it's because we had a fluke cold spell and the air in my house is dry and hot. I can tell though, on the days that I don't have any wine in particular that my skin is far more glowing and clear. As if I have a soft-focus lens on my face- sweet!! The days I have wine or go below my comfortable threshold of water intake, my skin looks a little dingy and the redness around my nose and cheeks comes back. You would think vanity would be my game changer...but sometimes I'm a bit thick.

When I would get bored, I drank decaffeinated berry tea and that would push me to get past the "boredom wall". The boredom wall is this thing I have in my mind where I start to crave things that aren't super great for me such as booze, sugar, convenience foods etc. because I'm bored. I used to give in to it almost daily. This experiment helped immensely in realizing when I had approached a boredom wall and what I could do to get past it. Surprisingly, by buckling down in those moments and drinking more water or decaf tea, the wall would almost always disappear with the cravings. I found that having little mandarin oranges around helped a lot too, due to the water in the fruit, but also the sugar (hello hypoglycemia!).

Would I do it again? Heck yeah! In fact, I've kept it going and am currently on Day 39. It feels good, y'all! I highly recommend it.

Would you consider doing monthly challenges with me too? I'd love to know! February is all about yoga!

Lu
I'm a Southern gal, a writer, a dreamer, a comfort food-enthusiast, a smart-aleck, animal-lover and determined to provide a peaceful, fulfilling, and positive life full of kindness and abundance...all while beginning my own small business from scratch! Come sit down on the porch and visit with me.